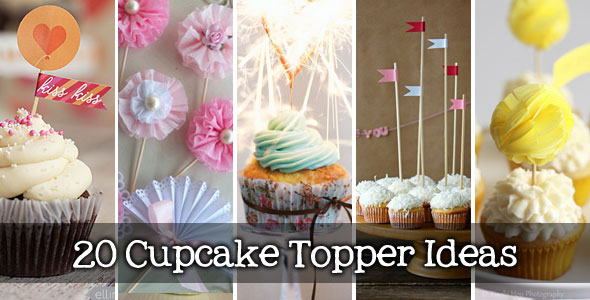 Oh how I love cupcakes.  They are endlessly fun.  They are oh so cute.  They are tasty.  What is not to love!?

I hope you like cupcakes as much as I do because I’m going to be sharing my favorite ideas and recipes in the coming days.  Before I get started on creating and sharing some of my creations, I thought it would be fun to share some inspiration.

Here are some of my favorite cupcake topper ideas. 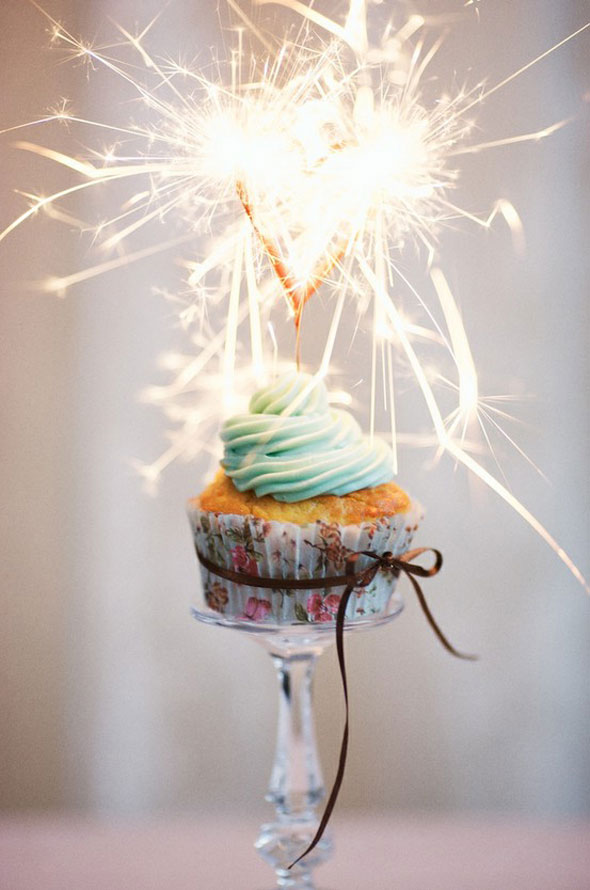 This may be my favorite picture of a cupcake – ever!  I love the festiveness of the heart sparkler.  This would be great as a Fourth of July surprise dessert.   Image via Marlein Overakker. 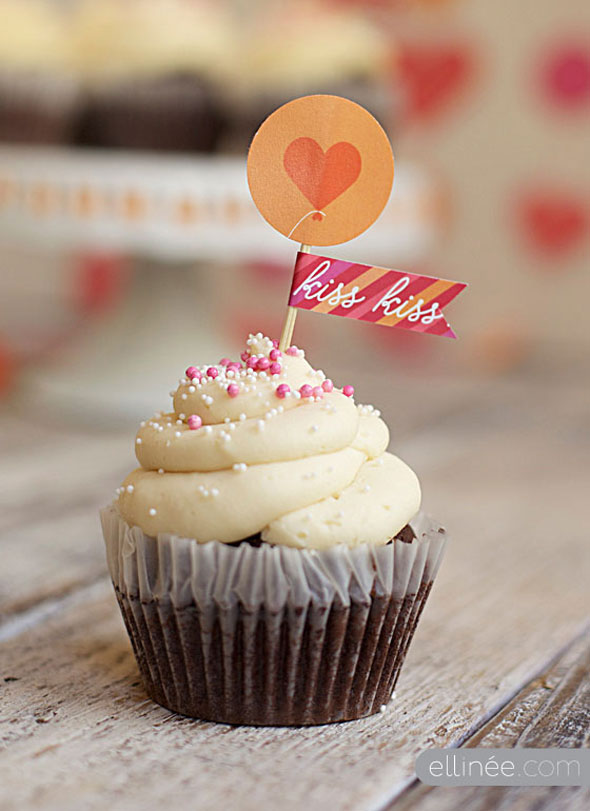 I recently stumbled onto Ellinee and immediately fell in love.  Such great, creative ideas.  I love the bright colors and simple design of these cupcake topper printables.  Ellinee has a lot of great free printables, so head on over and check them out. 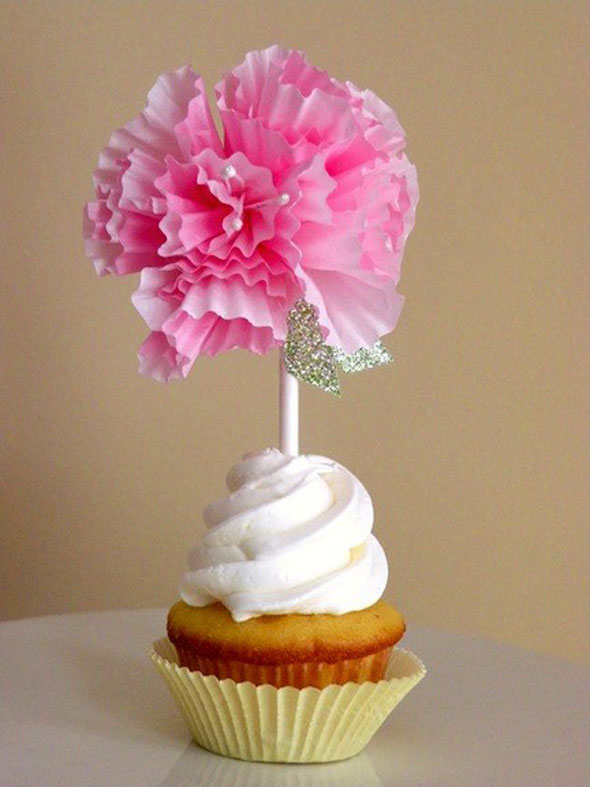 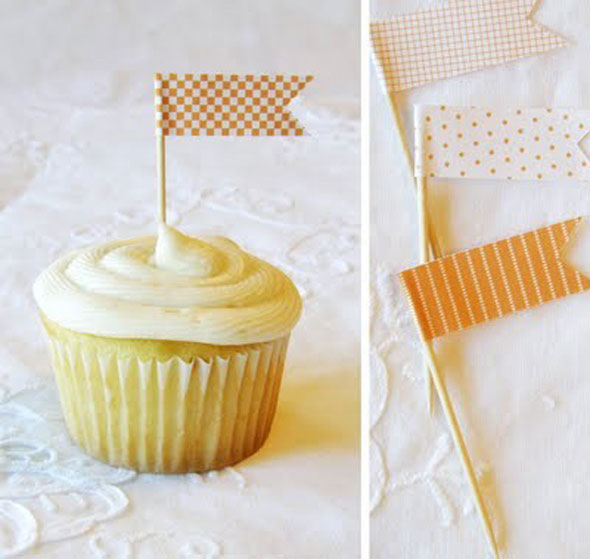 Paper flags are a popular trend in cupcake toppers.  The thing I love about the paper flag is that it is simple!  You can make (or find online) a cute printable or use your favorite scrapbook paper, cut it out, and you’re good to go.  Image via Little Paper Dog. 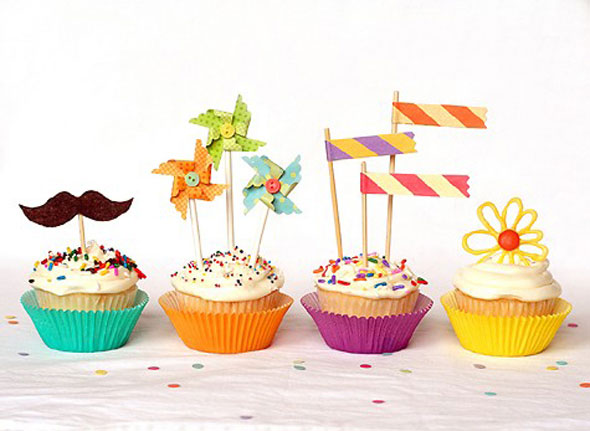 I came across Lisa Storms blog about a year ago and became smitten with her fancy paper crafts.  Fiskars is lucky to have her on their team. I love the simple paper cupcake topper variety she shared.  My favorite is the pinwheels with the tiny button in the middle, but the log skinny flags are a close second. 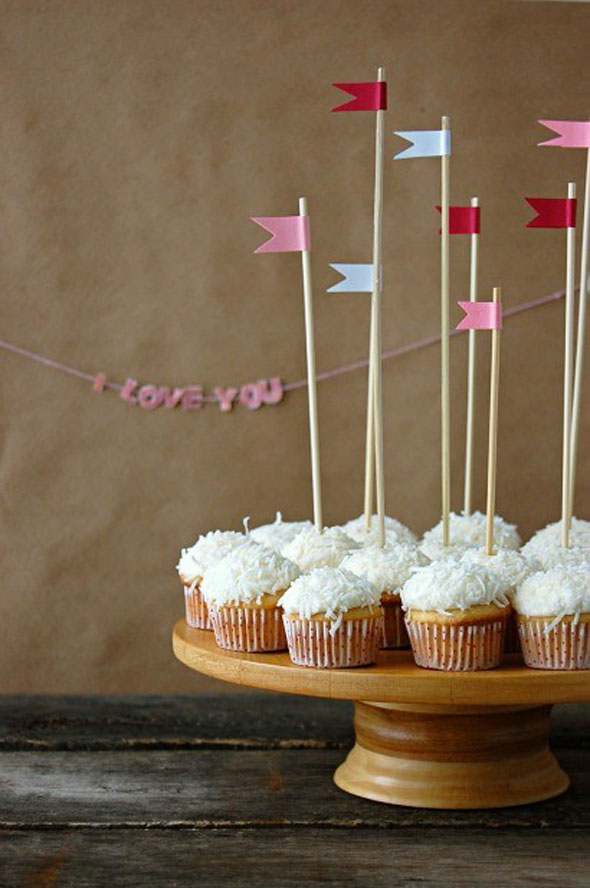 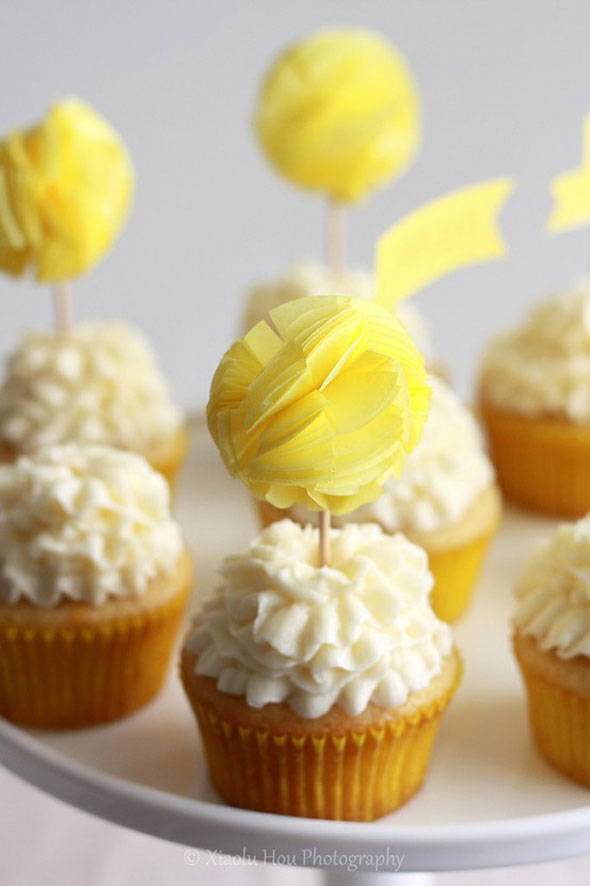 The frills of these tissue paper DIY cupcake toppers are simple and elegant.  The bright yellow would make these cupcakes perfect for a summer party, but you could make them using any color to coordinate with your party. Image via 6 Bittersweets. 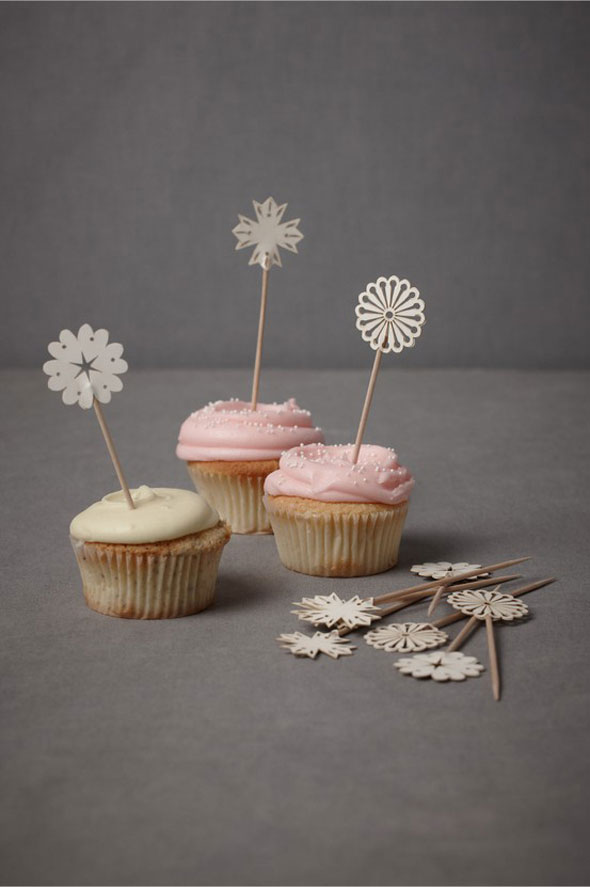 These ornate cupcake toppers are delicate and perfect for an elegant party or wedding.  You could buy them from BHDLN or make some using your Silhouette machine. 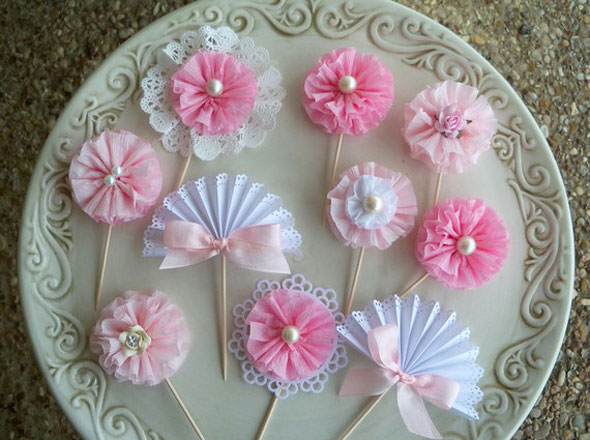 These fancy cupcake toppers are almost too fancy for a cupcake!  The detail and embellishments are just right to make these cupcake toppers perfect for a vintage themed party or wedding.  Image via JeanKnee.

Cupcake Toppers for a Boy Party 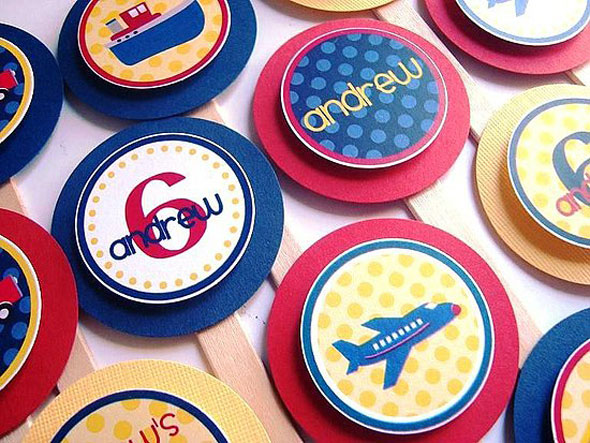 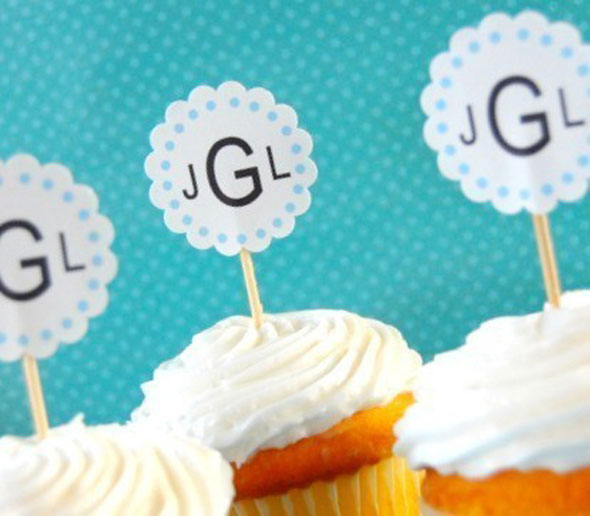 You can’t go wrong with monograms.  These monogrammed cupcake toppers would be great for a wedding or anniversary celebration.  Image via Mary Had a Little Party. 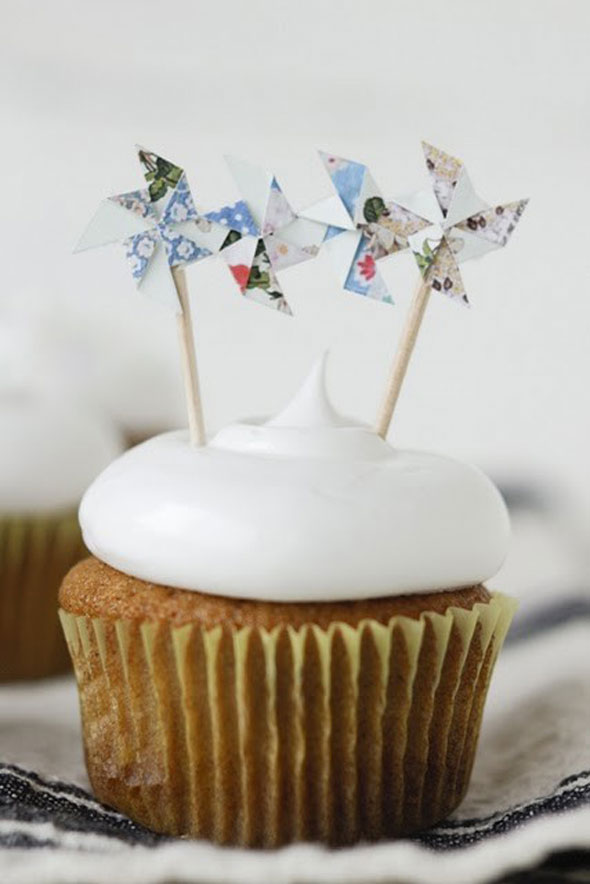 This tiny paper pinwheel banner is a simple way to dress-up your cupcake.  Anything tiny is sure to impress.  Image via Always with Butter.

Is there any easier way to DIY than a paper punch?  I think not.  I like these paper punched star cupcake toppers for a Fourth of July dessert.  These DIY cupcake toppers are so easy to make that your kids could help.  Image via Celebrate Creativity. 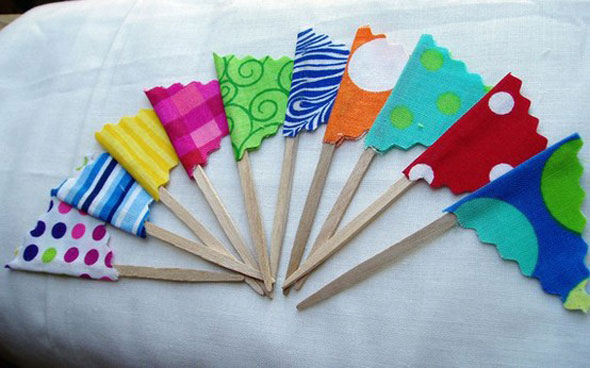 Another less thought of cupcake topper material is fabric.  Use scraps of old fabric that coordinate with your party theme.  This is a super simple and high impact way to dress-up your cupcakes.  Image via BooBahBlue. 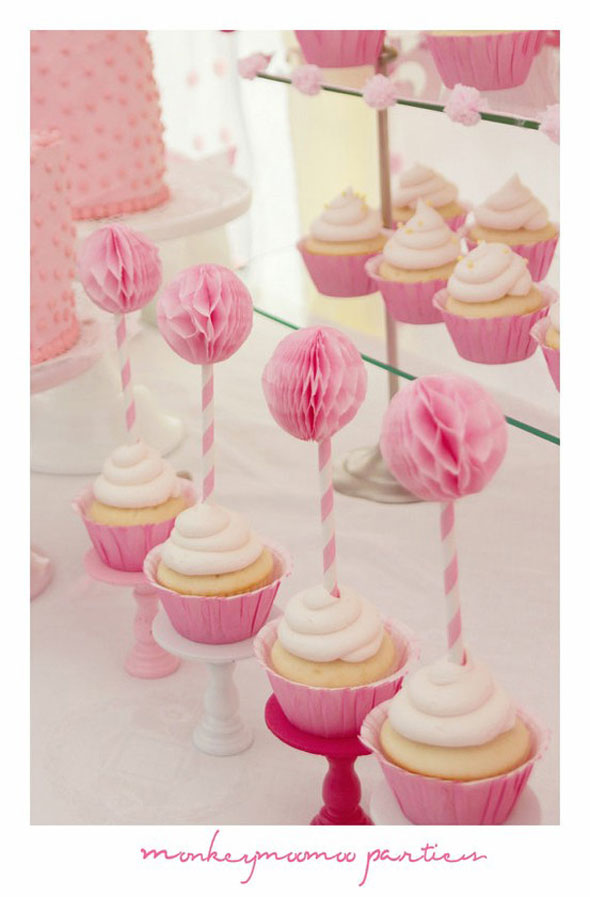 These paper puff cupcake toppers on the striped pink paper straws would be darling for a baby girl baby shower.  Image via monkeymoomoo parties. 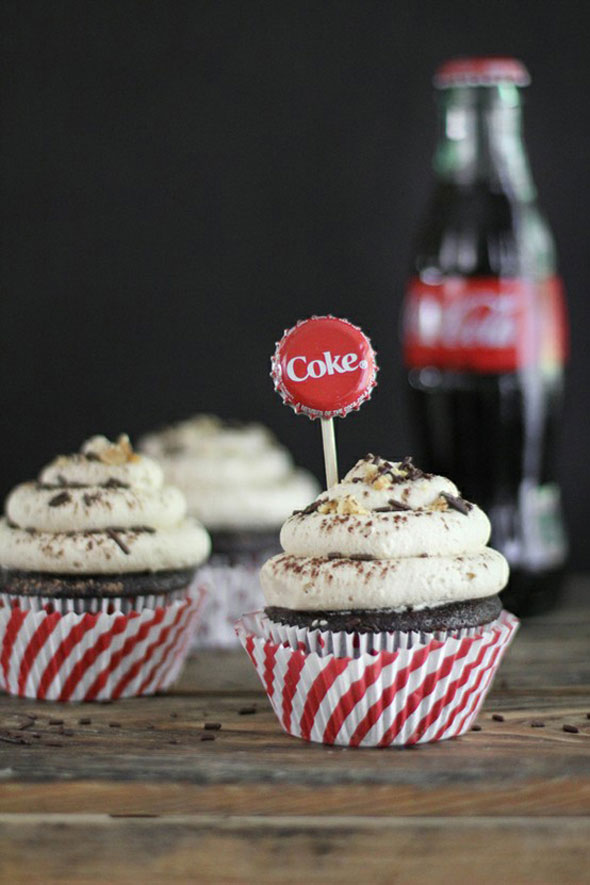 How clever is Sprinkle Bakes?  Using a bottle cap is an unexpected, unique idea for your cupcake embellishment.  Of course, my bottle cap would say Diet Coke. 🙂 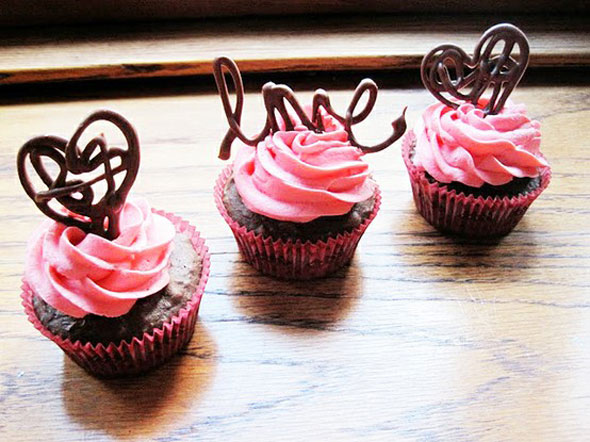 These handmade chocolate embellishments add charm to your cupcake.  You could customize your symbols and words to the time of year or event.  Image via Ready, Set, Craft!. 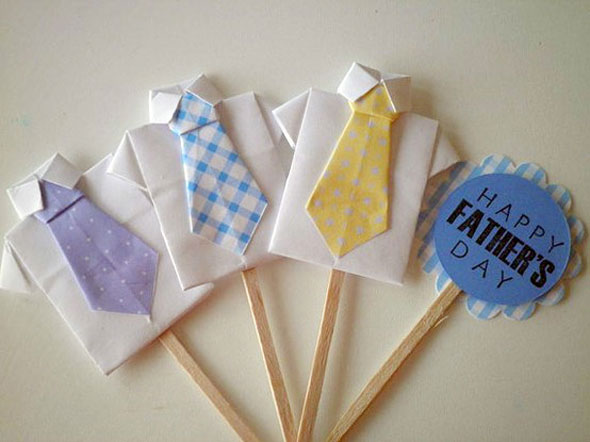 Wow.  These paper folded t-shirts and ties for Father’s Day are clever.  I don’t know if I would have the patience to make these, but they sure are cute. 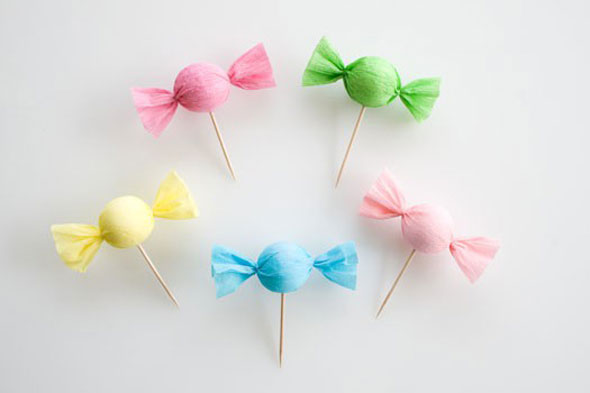 Make your own cupcake toppers using small Styrofoam balls and crepe paper.  This is a simple idea that could be used for a Candy land themed birthday party.  Image and tutorial at Cake Journal.

I’ve seen all variations of handmade flowers all over online.  I never even considered using them as a cupcake topper.  You could create paper roses, fabric roses, lace flowers, or felt flowers.  I’m thinking Mother’s Day dessert idea.  Image via The Decorated Cookie.

Do you dress-up your cupcakes with cupcake toppers?  What is your favorite way to decorate a cupcake?