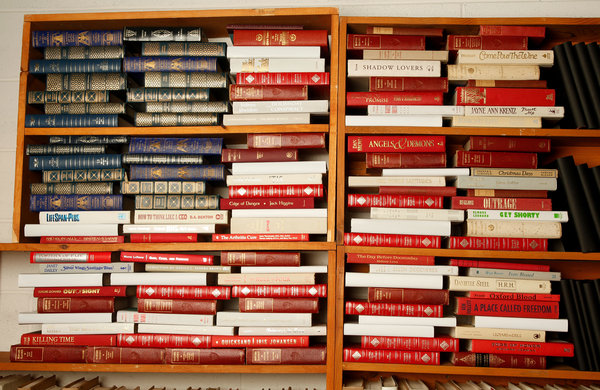 If only publishers would focus on the color of the spine instead of a book’s contents. More Photos »

Connect with us at @NYTimesHome for articles and slide shows on interior design and life at home.

“I was always amazed: they were exactly propped with perfect art books,” Mr. Andersen said last week, recalling how obvious it was that the homes had been styled by someone other than their occupants.

“Maybe all these people were interested in the same Botero coffee table book,” he added. “But I don’t think so.”

Since then, the self-consciously styled home has become almost commonplace, particularly in cities like New York and Los Angeles where creative types congregate. “It’s not just rich people now,” he said. “It’s all of us.”

As Mr. Andersen noted in a recent issue of Vanity Fair, in an essay on the larger topic of cultural stasis, millions of Americans are now “amateur stylists — scrupulously attending, as never before, to the details and meanings of the design and décor of their homes, their clothes, their appliances, their meals, their hobbies, and more.”

For proof of this phenomenon, one need only consult one of the shelter magazines or a design blog like Apartment Therapy that features photos of homes designed down to the last detail. Studying these spaces, one can’t help noticing that the décor seems to bear little relationship to the way people actually live: deer antlers adorn the walls of people who almost certainly don’t hunt; vintage typewriters sit on school desks too small to be functional; books have been arranged on shelves by color to reflect some perceived notion of good design. (A few examples are shown on this page; if you can count three or more in your home, you may be over-propped.)

Elaine Miller, who writes Decorno, an occasionally sharp-tongued design blog, believes this sort of stagecraft is largely a result of living through social media.

“People are insanely self-conscious,” Ms. Miller said. “People act like they’re always being watched. Even their house is a performance.”

She cited as an example the way design bloggers and Pinterest users have lately become obsessed with entertaining.

“It’s this throwback to the ’50s and ’60s, where women are going to throw these big parties,” she said. “They have a bar cart and they’re ready to entertain you.”

Ah, the bar cart. If there’s one thing that typifies the self-consciously styled home, it may be that. Evoking a mythical Hollywood Regency glamour, the bar cart telegraphs that the resident leads a life as rich as a socialite in a Slim Aarons photo and is constantly entertaining at home, though in reality it’s a prop that mostly collects dust. (This reporter should know: of the three pieces of furniture in his living room, one is a bar cart that’s still waiting for its first party.)

But with so many of us aspiring to be amateur Dorothy Drapers (and posting the evidence on design blogs), it’s inevitable that once-fresh decorating ideas like the bar cart will become clichés.

Design classics like Barcelona chairs and Arco floor lamps are now so overplayed that it’s impossible to own them without feeling like a design victim.

At least one popular Tumblr has built its entire identity around ridiculing their presence in the homes featured on blogs. The site, which goes by a name that can’t be printed in this newspaper, calls out a range of familiar design clichés (from the Saarinen Womb Chair to a “terrarium that contains a tiny succulent array perched upon a stack of books”). But even seemingly uncommon decorative accessories like a library card catalog are pilloried, illustrating the been-there-seen-that feedback loop that will be familiar to any Pinterest user.

One wonders if earlier generations were so self-conscious about decorating their homes. Didn’t they simply buy things they liked or could put to good use, and keep them for decades?

Ms. Miller agreed with that theory — up to a point. “Even my grandparents went out and bought the same lamps as their neighbors,” she said. “The difference was, they weren’t trying to be awesome. They were just trying to get lights in their house.”

In a mock plea, she added: “Can everyone stop trying to be so awesome? Can we just chill out?”

Probably not. Twenty-five years ago, you saw the inside of the homes of your friends and neighbors, and of members of your extended family, and that was about it. Now there are countless images of picture-perfect interiors online to stoke your sense of envy and aspiration.

He admitted to falling into the trap himself.

Years ago, Mr. Andersen bought a vintage issue of Life magazine with a cover story about the assassination of President Kennedy. “I put it on a table in my bathroom,” he said. “Why is it there? It’s a prop. It’s not like I’m on the john reading it.”

A version of this article appeared in print on May 17, 2012, on page D9 of the New York edition with the headline: How to Tell When You’re Over-Propped.

Get Free E-mail Alerts on These Topics

Anatomy of a Scene: 'Blue Is the Warmest Color'